DotA - Defence of the Ancients 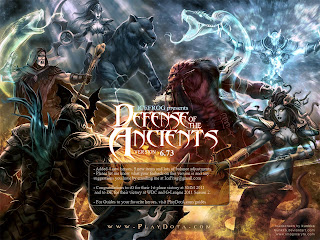 DotA is set up as an epic, ten player battle that takes place over the course of about an hour-long game.  There are ten players at a time, split into two teams of five. Each player takes control of one hero, and the teams fight it out across the battlefield with the help of computer controlled units and structures until one side destroys their opponents' Ancient. The Ancients are heavily defended structures situated in the middle of each base.

There are several places you can play the game with others. Blizzard's Battle.net service is a good place to start; there are always plenty of DotA games going on at all times which are open to everyone. The second place is in private leagues and servers, which you can sign up to participate in. The third popular place for playing DotA is LAN cafes and other local gaming hotspots. A lot of cafes have very active DotA communities, so if you want to have fun and meet some new people you should definitely check them out. DotA is a team game, so if you have friends who are interested in playing or already play, forming a team of friends can be a lot of fun and take the game to a whole new level.
Posted by Kushan Senanayaka at 10:10 AM No comments: 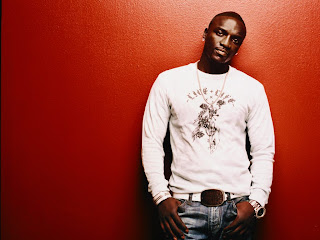 As the son of Senegalese percussionist Mor Thiam, Akon was raised in a musical setting and taught to play several instruments including the djembe. He was born in St. Louis, Missouri, U.S., so that he would not have to go through the immigration process, but he lived in Dakar, Senegal until the age of 7, split time between America and Senegal until he was 15, then he moved permanently to Jersey City, New Jersey.

During Akon's alleged time in jail for three years, he began to understand his music abilities and developed an appreciation for his musical background. Akon's unique blend of West-African-style, skills and moves eventually caught the ears of executives at Universal. Akon began writing and recording tracks in his home studio. The tapes found their way to SRC/Universal, which released Akon's debut LP Trouble in June 2004. The album is a hybrid of Akon's silky, West African-styled vocals mixed with East Coast and Southern beats. Most of Akon's songs begin with the sound of the clank of a jail cell's door with him uttering the word "Konvict".

He has also been rumored to have three wives, however he has since revealed that he only has one, named Tomeka. Akon claims he has six children with three different women in an interview with Blender. Akon claims to have great relationships with all his children, and that he wishes to keep his family protected from the public eye. He also states that his religion made him a better person, and provides guidance to how he acts among others in life.

He also has his own charity for underprivileged children in Africa called Konfidence Foundation.Akon owns a diamond mine in South Africa and denies the existence of blood diamonds (also known as "conflict diamonds") saying, "I don't believe in conflict diamonds. That's just a movie. Think about it. Nobody thought or cared about conflict diamonds until "Blood Diamond" was released. "However, he has since stated that he does accept that blood diamonds exist, and that he is partial-owner of an African mine that is dedicated to avoiding use of blood diamonds while also donating profits to local communities.

"The Smoking Gun" reported in April 2008 that much of Akon's purported criminal and incarceration history has been dramatically embellished. In particular, Akon's claims to be part of an auto-theft ring and his claim to have spent three years in prison were challenged with court records and interviews with detectives involved in Akon's case. 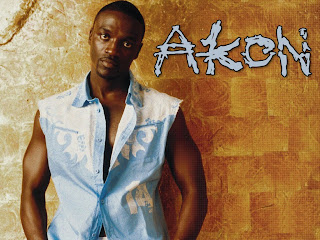 According to "The Smoking Gun's" article, Akon was not convicted of any crime and did not serve any time in prison from 1999 to 2002 as previously claimed. He stated that "The Smoking Gun's" attempt to “discredit” him “makes no sense as it is something he is trying to forget.” Akon retorted that he never spent 3 years in prison consecutively, but many shorter sentences that add up to three years, and cites that as the mis-understanding by The Smoking Gun's article

Posted by Kushan Senanayaka at 2:33 AM No comments:

Antivirus software (alternate spelling anti-virus) mainly prevent and remove computer viruses, including worms and trojan horses. Such programs may also detect and remove adware, spyware, and other forms of malware.

A variety of strategies are typically employed. Signatures involve searching for known malicious patterns in executable code. However, signatures can only be updated as viruses are created; users can be infected in the time it takes to create and distribute a signature. To counter such zero-day viruses, heuristics may be used to essentially guess if the file is truly malicious. Generic signatures look for known malicious code and use wild cards to identify variants of a single virus. An antivirus may also emulate a program in a sandbox, monitoring for malicious behavior. Success depends on striking a balance between false positive and false negatives. False positives can be as destructive as false negatives. In one case a faulty virus signature issued by Symantec mistakenly removed essential operating system files, leaving thousands of PCs unable to boot.
Posted by Kushan Senanayaka at 12:49 AM 1 comment:

Royal College is one of the foremost schools in Sri Lanka. Established in 1835, it has stood around for more than 175 years or excellence.

The history of this wonderful school can be found here.
Posted by Kushan Senanayaka at 1:29 AM 1 comment: